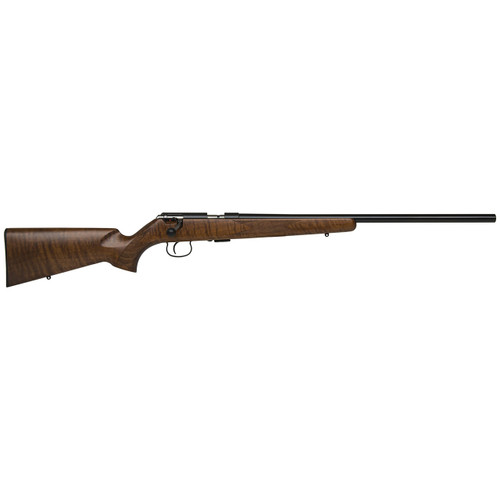 The models of the series 1516 in cal. .22 WMR have a long tradition at ANSCHÜTZ. This classic caliber with a bullet diameter of 5.5 mm was launched by Winchester in 1959. It is extraordinarily suitable to be used for small animals up to the size of a fox at a distance of up to 100 m. At this model of the series Match 64 modifications were carried out in the area of the receiver. The external diameter was enlarged from 25 mm to 26 mm. This modification entails some advantages. The weight of the receiver was increased by 12 % which makes the barreled action more rigid. In addition the locking surface is enlarged by 15 % which leads to even more safety for the shooter when firing the shot. The new shape of the receiver will be continued in the firing pin nut which makes the system more elegant. In addition the old engraving on the upper side of the prism has been replaced by the more attractive „Wave-Style“.

Barreled Action
The action is used in the ANSCHÜTZ Luxus repeaters 1416/1417 and 1516/1517. This is a bolt action with cam cocking, claw extractor, additional cartridge holder and ejector. Telescopic sight mounting is by an 0.43" wide ANSCHÜTZ Wave Style V-block dovetail rail or by additional drilled and tapped holes. The sliding safety catch onthe right hand side blocks the trigger sear in the safe position and simultaneously lifts the trigger sear and bolt release latch. The bolt can also be opened in the safe position, allowing unloading the firearm with the safety engaged.

Trigger
ANSCHÜTZ target two-stage and single-stage triggers have always set the standard for quality, reliability, and precision. It is not without reason that ANSCHÜTZ triggers are known as the best in the world. Many manufacturers offer adapters for integration of this master­piece of the German gunsmith‘s art into their firearms. The light weight, hardened and finely ground trigger components facilitate fast and consistent trigger release.

Barrel
The cylindrical precision barrels with excellent shooting performance are manufactured according to the same ANSCHÜTZ special process, used for the manufacture of the world-famous ANSCHÜTZ target barrels. The same also applies to the manufacturing process of the chamber and the recessed muzzle. Many new models are incorporating the latest technology in manufacturing.

Sight set
This model is delivered without sight. However the receiver is equipped with threaded holes for an individual scope mount.