⚠️ Due to a significant increase in orders, shipping may be delayed. We appreciate your patience. 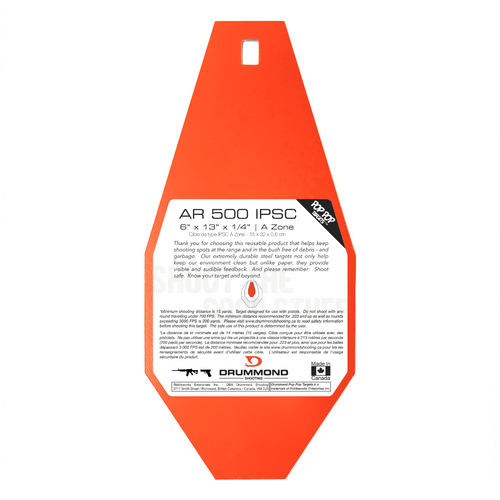 This IPSC A Zone Target is cut from 1/4″ AR500 steel. Don’t be fooled by the thickness – this target can withstand a beating. Designed for pistol shooting, 9mm and .40 S&W are no match for this steel. We’ve cut this at full size so you know wherever you place it you’re always practising on a competition-size A Zone Target. Want to stay accurate with your rifles in .223 as well? We’ve tested this as close as 10 yards and seen great results, but do recommend further distances for target longevity and safety when shooting .223 (read below). Setup is as quick as hanging from our Post Topper. With something so simple to use you can spend more time practicing your accuracy and speed, and less time setting up.

IPSC A Zone Target
Between your guns and ammo you already have enough to think about when going to the range. To keep weight to a minimum we decided to offer this IPSC A Zone target in 1/4″ AR500 rather than the typical 3/8″ thickness. Since most customers will practise on these IPSC targets with their pistols, we wanted to have the most cost-effective, light-weight option while continuing to offer the quality product you expect. You get the same hardness benefits of AR500 while saving in other areas.

You Said Rifles?
We have done testing with 1/4″ AR500 at a distance of only 10 yards, although we cannot recommend such close-range shooting to our customers. Even with our thicker 3/8″ AR500 targets we suggest a distance of 200 yards for rounds over 3,000 fps, so the same holds true for this IPSC A Zone target in 1/4″ AR500. Why? Rounds like .223 travel so fast that they can cause pitting in the steel and accelerate the wear on your target. The best option is to start far away and bring your target in as you feel comfortable.

This target should not be shot with rounds such as 7.62×39, .308 or more powerful ammunition. At 1/4″ thick, there is simply not enough mass to withstand such a powerful impact. The target can fail by bending/cracking/allowing a round to pass through. For these more powerful rifle rounds we suggest our 9×9 AR500 Steel Target, or for our big bore customers, our 50 BMG Gong.

What’s IPSC?
IPSC stands for International Practical Shooting Confederation. A very active style of shooting, IPSC requires a combination of speed and accuracy to move through various stages effectively. It also incorporates reloading and drawing from the holster, adding to the challenge. Targets can be moving, reactive, and some are even penalty targets. The stages are never the same, and include obstacles that force competitors to develop strategies and techniques to shave seconds off their times.

Scoring
There are three scoring zones on this style IPSC target: A, C and D. The entire target measures 45cm wide by 57cm tall. This target, the A zone, is the centre of the target, and is 15cm wide by 32.5cm tall. The C zone is 30cm wide by 45cm tall. The D zone is everywhere outside of the A and C zones. On the paper version of this target there is a non-scoring zone of 0.5cm around the entire perimeter of the target.