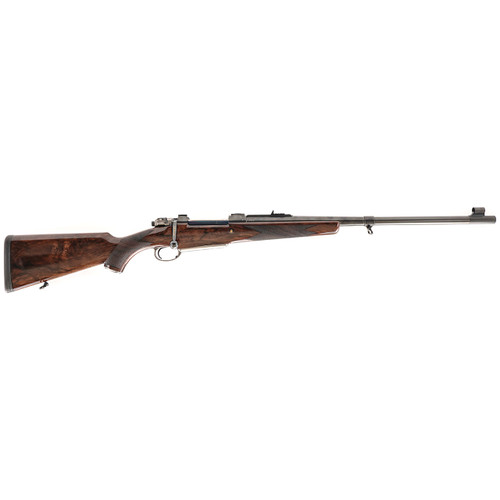 Following hot on the heels of the exceptionally popular “Mopani” special edition series – which sold out within a week of releasing – the Tsavo commemorates two of the most feared man-eating lions of the 19th century, who terrorised the builders of the Kenya to Uganda railway in 1898.

Limited to a run of 12, each rifle bears its unique series number in gold on the floor plate, along with detailed engraving of the infamous pair of maneless lions. Their names – “The Ghost” and “The Darkness” – are inscribed on the Tsavo’s EAW swing-off scope rings, and the identity of their eventual nemesis – J. H. Patterson – is set into the bolt handle, along with their reported number of their victims (135). Stocked with specially selected grade eight Turkish walnut, the Tsavo’s looks and durability is further enhanced by Rigby’s London Best Oil finish and leather covered recoil pad.

Built around the magnum Mauser M98 double square bridge action in .375 calibre, the rifles benefit from all the features that define Rigby’s multi award-winning Big Game range. Each Tsavo is supplied with Rigby’s cleaning accessories in an exclusive leather and canvas case, styled to capture the intrepid spirit of the late Victorian era.