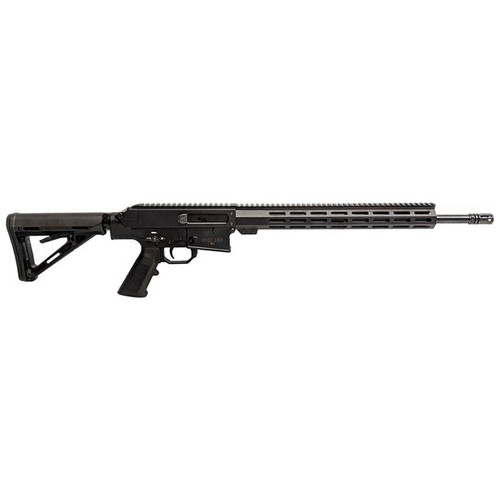 The (WS-MCR, Trademark Pending) Wolverine Supplies – Multi Caliber Rifle has been designed to be available in 5.56 NATO, 7.62 x 39 or .224 Valkyrie. We like the original AR180B "concept", so we went back to it and started fresh. We stayed with a modern CNC aluminium lower receiver. No need to reinvent the wheel, so we used that lower although we did add one very major improvement. We built in a rear take down pin, this eliminates the movement often found between the upper and lower and also strengths and stiffens the complete rifle.

Again, looking at the original AR180B rifle, we followed their lead and in the new WS-MCR we once again have both the cam pin and the charging handle travelling on steel. To achieve this, we added two steel plates: one inserted on each side of the upper receiver which is CNC machined from aluminium. This added to the cost, but we consider the advantages well worth the extra expense. We also carried out some improvements to the bolt carrier. This resulted in a much smoother action and has minimised the wear associated with a hard steel component running on soft aluminium.

As the WS-MCR is available in your choice of three calibers we had to revise the gas system, again this is different to anything that has been marketed to date. We have spent several months fine tuning the gas system and this has resulted a soft positive ejection. Another new feature not found on any previous production rifle of this general type is that we have added a case deflector. After several thousand rounds, we have avoided the ugly scarring that ejected cases can inflict on the receiver.

The hand guard which is free floating features a 1913 type accessary rail on the top. We have chosen a long 15 inch handguard. The handguard will be required to be slipped off in order to clean the gas system. The gas cylinder plug requires a standard ¼ inch wrench or socket for removal. Any further disassembly or modification may void the warranty.